IBM gathered customers and partners from around the world at the Think 2018 event, the presentation conference for the company’s technologies and products, held in Las Vegas, between March 19 and 22. Eurotux, as an IBM Gold Business Partner, was present, getting to learn first-hand about some of the major novelties of the technological giant, namely in the field of Artificial Intelligence.

One of the features of the conference was the Watson Assistant, the personal assistant with voice-based Artificial Intelligence, which can be connected to several products, from cars, homes, and places, such as hotel rooms, conference halls, or retail stores. The Watson Assistant can be trained for functions specified by a company, thus helping you to create your own personalized voice assistant. Combining Artificial Intelligence with cloud and the Internet of Things, this solution seeks to guarantee a “transformative experience for its customers”, as explained by IBM. And it can be used by companies to strengthen their relationship with their customers.

Think 2018 also unveiled to the world, the Watson Services for Core ML, a partnership between IBM and Apple to enable companies to more easily create intelligent apps, for iPhone and iPad. Also using Artificial Intelligence, this service allows you to develop applications according to your needs, based on machine learning. The solution can be trained to recognize equipment, for instance, in order to streamline inspection processes. This technology can speed up business procedures and operations; however, there is still no official date for its release.

During Think 2018, Eurotux also learned about the low cost blockchain platform for start-ups. This IBM tool is still in test phase, but its main goal is to allow start-ups and programmers to develop their own blockchain projects. Blockchain technology is a distributed database that allows you to record transactions, as well as additional data, within a network, enabling access to this information in real time.

Another novelty revealed by IBM during the event for customers, which Eurotux also attended, was the Cloud Private for Data, a platform for private clouds that was projected to assure the same flexibility of a public cloud for on-premises data centers. Developed with Kubernetes open-source containers technology, IBM Cloud Private can be installed on several systems, making the cloud “more accessible and easier for businesses of all sizes”, as stated by IBM. The solution combines “flexibility and control”, according to the company, highlighting its added value for the financial sector, where security and reliability are fundamental values.

The IBM Q quantum computation platform was another of the Think 2018 highlights, with IBM demonstrating its commitments to marketing quantum computers in the near future. The plan for the near future revealed the world’s smallest computer, measuring only 1 millimetre and a capability equal to the x86 machines of the 1990s. This solution’s potential lies in the possibility of aggregating several of these miniscule computers in a protection hive, with blockchain technology, which can form an additional protection system, detecting theft and fraud. For now, we’re within the realm of the imagination. 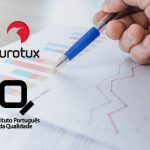