MORE Sec, a Eurotux Group company, specializes in conducting Vulnerability Analysis, detecting existing failures on corporate networks or website, as well as Intrusion Tests [PENTEST], which allow you to assess in detail, vulnerabilities that can be exploited, as well as discriminate where intervention should be a priority. These diagnostics help prevent the risks associated to security violations that can seriously harm companies.

In a reality marked by constant cybersecurity threats, the vulnerabilities of corporate networks can be targeted by attacks coming from different directions. As such, it is essential to understand and detect the problems that can eventually lead to unwanted invasions, focusing on the execution of these types of diagnostics.

The PENTEST, as opposed to the Vulnerability Analysis that detects pre-existing flaws, and assigning them for correction, proceeds to simulating a real situation of exploiting vulnerabilities and the subsequent network penetration, analyzing attempts at unauthorized access, both internally (local) as well as externally (remote). As such, this represents the perspective of a possible attacker, displaying flaws that the attacker may access, as well as the data that the attacker may have improperly obtained.

The tests can be conducted by knowing the IP or set of IPs, with what is known as the White Box, or with the Black Box method, in which there is no information whatsoever on the client’s network, more closely resembling a real attack.

The regular execution of this type of diagnostics is fundamental, in order to comply with the best practices in IT Security. It becomes especially important after relevant changes have been made to the data networks or web environments, constituting a form of minimizing the risks related to security violations, which may lead to financial impacts, or violation of Personal Data, which is a serious event, in light of the GDPR – General Data Protection Regulation, not only on economic grounds, namely as a result of the considerable fines written into the new law, but also in terms of reputation.

Auditing for security, by way of a Vulnerability Analysis, and Intrusion Tests, allows you to confirm if your Information Technology infrastructure is sufficiently resilient against the most sophisticated threats.

Don’t wait any further to get in touch with us. Don’t risk the security of your business!

January 29, 2021 Grupo Finançor from Açores renews its IT infrastructure with Eurotux

This year the employees chose to contribute to the... 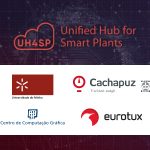 UH4SP project invests in IoT and Industry 4.0 to revolutionize the industrial sector