Eurotux Ecosystem 2019 was a success

The 2019 Ecosystem gathered Eurotux partners and clients on October 29th, at the Casa do Ribeirinho, in Matosinhos, Portugal, having IT-as-a-Service as its central theme. During the event, Eurotux explained how it’s providing this solution to its clients, fostering the transformation of its IT infrastructures with the simplification of processes, and adding value to their businesses.

The Ecosystem’s participants were also informed on IBM solutions for companies and the advantages of working with a certified IBM partner, such as Eurotux, with the interventions of Juan de Zuriarrain Pérez-Urruti, leader of the SPGI’s platform for cognitive systems, and Rui Ribeiro, Director of IBM GBP Portugal. The Chief of Market Division for Synetics, Stefan Böttcher, spoke about the CMDB i-doit and about the partnership that was established with Eurotux.

The opening of the event was conducted by Eurotux’s CEO, António Coutinho, who channeled to the participants that the company is registering enormous growth that will reach its best numbers ever this year, thanks to the positive impact of internationalization, the DEVOPS services, and new outsourcing contracts. A very positive scenario that also enabled the purchase of a new facility, to which Eurotux is presently moving to.

In addition to the lectures, there was also plenty of networking and a prize draw at the always pleasant and elegant environment of the Casa do Ribeirinho, with participants leaving a generally positive feedback regarding the event. 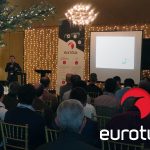 Eurotux has new facilities in Braga