There are two main abbreviations that appear in our search for secondary memory: HDD and SSD. Knowing the difference between these two types of memory is crucial to make the right choice. But what are the differences between the HDD and the SSD?

When an organization grows and starts dealing with a bigger data volume, it is mandatory the search for a more powerful infrastructure, and more disk space.

There are two main abbreviations that appear in our search for secondary memory: HDD and SSD. Knowing the difference between these two types of memory is crucial to make the right choice.

What are the differences between the HDD and the SSD?

The HDD (hard disk drive) is a non-volatile data storage device, and it is composed of a magnetic disk that stores data that can be written and read.

Meanwhile, the SSD (solid state drive) is also a non-volatile data storage device, although it does not have any moving parts. It is composed by a semiconductor integrated circuit, and uses flash memory.

The first difference is visible in both of the structures’. The HDD has a spinning magnetic disk, while the SSD has chips. The reading speed and performance of the HDD depend on the disk’s rotation per minute (RPM), and that is a downside compared to the SSD, a much more recent technology.

The main upsides of SSD when compared to the HDD are:

The disadvantage of choosing a SSD was the higher price.

Although, with the popularization of this technology, the prices have been decreasing and said technology is becoming standard in most cases, except for bigger volume of data, when a non-SSD or hybrid disks are more suitable.

These last ones combine the speed of the SSD with the storage capacity of the HDD, at a lower price.

If your infrastructure has a bottleneck or is in end-of-life, our advice is that you review the options with a SSD disk and get a better performance.

Eurotux’s most recent customer to rely on IBM’s FlashSystem solutions is the Plimat enterprise, a Portuguese reference on the pipe fittings market.

We have reduced the cost of IBM’s FlashSystem, models FlashSystem 5010 and FlashSystem 5030, which are all flash and hybrid flash solutions built with IBM’s Spectrum Virtualize™ technology, and with AI-powered IBM Storage Insights.

Do you want to know more about this offer? Send us an email to comercial@eurotux.com. 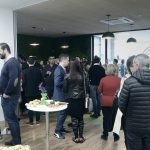 From the inauguration to remote working