Eurotux Group wishes all its clients, suppliers and employees, as well as their families, a Merry Christmas and a Happy New Year!

2020 was definitely an atypical year. Despite the adversity of the pandemic, the company managed to maintain the quality of its services, the virtual conviviality of the team and its sustained growth.

February was a festive month in the company, for the celebration of Eurotux’s 20th anniversary which occurred almost simultaneously with the inauguration of the new facilities. In March, however, the beginning of the pandemic in Portugal forced 80% of employees to leave the office and adopt remote work.

Even though the employees were working from home most of the year, in such a difficult year, Eurotux managed to maintain normality in the provision of its technical services and the realization of projects with excellence. Among the several national clients we can mention Casa das Lâmpadas, Agribar, IPCA and Fersil. The international project that stood out was that of DevOps (CI/CD) in the United Kingdom.

In May Eurotux was on television and radio with an advertising campaign, which also involved large national portals. This initiative generated great visibility for the company at national level.

To conclude, the Eurotux Group thanks all clients, suppliers and employees who accompanied us throughout 2020. Without your collaboration the results would not be the same. In an atmosphere of festivity and planning of the 2021 projects, we take the opportunity to convey our wishes for positivity and solidarity.

To all a Merry Christmas and an Excellent New Year! 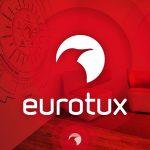