Eurotux wins IBM award for Partner of the Year in Autonomy

Eurotux has been granted the Award for Partner of the Year 2017 in Autonomy, during the IBM Ecosystem 2018, the annual conference for IBM Portugal’s Business Partners, which took place on May 24th in Cascais, Portugal. For the third consecutive year, Eurotux has been distinguished by IBM for its significant role in affirming the American company’s global strategy.

In 2017, Eurotux received IBM’s Award for Partner of the Year in Infrastructure, while in 2016 it was distinguished as Hardware Partner Revelation of the Year. Now, it has been distinguished as Partner of the Year in Autonomy, emphasizing the recognition of Eurotux’s professionalism and skill as an IBM business ally. Moreover, in 2017, Eurotux also obtained the IBM Gold Business Partner status, a certification that recognizes the company’s excellence in technical skills, as well as its customers’ satisfaction with services provided.

At the IBM Ecosystem Summit 2018, the American technology company reinforced its commitment to strengthen relations with its partners, through several initiatives for consolidating skills and new benefits. The conference had 150 attendees who shared their knowledge and experiences, specifically focusing on IBM’s strategic areas, namely Artificial Intelligence, Cloud, Security, Blockchain, and Mobility. The event capacitated partners as the next generation of allies, with the certainty that a wider range of knowledge of the entire IBM ecosystem, leaves them better prepared to handle future challenges.

As an IBM Gold Business Partner, Eurotux has privileged access to features that allow it to continuously improve the solutions it offers its customers, and promote the responses that best suit their needs. A process that is essential for customers to extract the most out of the IBM technology they’ve implemented. It’s a trio that includes IBM, Eurotux, and the customer, promoting the growth of all parties.

Don’t hesitate to contact us and learn about how Eurotux and IBM can help your business! 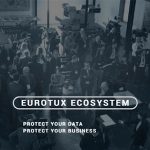