Global Media and Eurotux expanded their collaboration with services contract

Eurotux closed a services contract with the Global Media Group, which owns the Portuguese daily newspapers, Diário de Notícias and Jornal de Notícias and the Portuguese news radio station TSF, among other news outlets, to manage its infrastructures, considerably increasing the relationship it has maintained with this client for several years.

This contract underscores the trust that Global Media has in Eurotux’s services, expanding their collaboration. The Eurotux Group has previously collaborated with Global Media in several projects, namely with the implementation and hosting of the platform Dinheiro Vivo. The new contract strengthens Eurotux’s position as a partner of excellence in the field of media, where it maintains a relevant portfolio, involved in several publications of reference in Portugal.

The Eurotux Group maintains a partnership of several years with the Impresa Group, having been responsible for implementing the projects of the Portuguese weekly newspaper “Expresso”, and the Magazine “Caras”, among others. Dipcode, the Eurotux Group’s Web Development company, recently took on the redesign of the new website for BPI Expresso Imobiliário, a large scale and highly demanding project. In addition to the connection Impresa, Dipcode also collaborates with the Trust in News Group (TIN), namely within the scope of the websites Activa and Holofote. Dipcode also developed TIN’s online store with a new shopping experience for the media group’s publications, which owns, among other publications, the Visão, Exame Informática, and the Courrier Internacional.

With a vast experience in the field of web development and with solutions that integrate robust technologies, allied to best practices, the Eurotux Group is a privileged ally in driving the publishing sector, looking beyond the traditional business models and offering design, usability, and accessibility, as well as the highest standards on the market.

Eurotux has new facilities in Braga 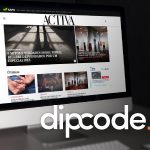 New website for the magazine Activa was developed by Dipcode