Grupo Finançor from Açores renews its IT infrastructure with Eurotux

The infrastructure was built with two IBM Power servers and one shared storage, running in an AIX 5.3 environment. However this OS was no longer supported in more recent hardware.

Therefore, with the limitations associated with its end-of-life (EOL) and considering the need for having technical support by the manufacturer, the project would be made to proceed with the infrastructure’s update.

In order to overcome this technical challenge (first seen as impossible), Eurotux contacted the support of IBM’s sole distributor, Arrow, and together found the solution, which was the creation of a WPAR (workload partition) to emule the old system, creating a image of this system and hosting it in this WPAR.

Also developed by Eurotux, a specific backup script could enable the advantages of having a new Tape Library, specially having an optimized capacity of the LTO7 tapes, better than the previously used technology.

In conclusion, there is now a consistent infrastructure, technologically updated and suitable for the client’s needs.

Is your IT infrastructure near EOL? Would you like to increase the performance of your IT systems? Send us a message or email and know how!

Finançor, S.A. was founded in 1954 by a group of industrialists with Micaelense roots, led by Visconde Botelho, absorbing then the totality of Sociedade de Moagem Micaelense, Lda.

The group’s companies are present in the market of animal nutrition, food, food distribution, and also hotels and leisure.

January 29, 2021 Grupo Finançor from Açores renews its IT infrastructure with Eurotux

This year the employees chose to contribute to the... 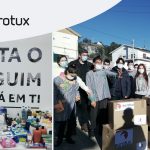