Eurotux implemented POWER8 technology on Fersil’s Information Technology, in Portugal and Angola, replacing the company’s previous IBM system. This update allows the “leading Portuguese producer of tubes and plastic accessories” to improve the performance, capacity, and scalability of its IT infrastructure. All this while reducing costs.

Eurotux’s intervention included replacing the previous IBM System with internal disks, in Portugal and in Angola, with POWER8 technology, with an external Storwize V5010 storage and two SAN Switches. The new infrastructure enables virtual machines to support the production machines, in Portugal as well as Angola. It also enables the creation of a test machine to support development, as well as the creation of Linux machines, currently used by Fersil in Intel environments.

Fersil – Freitas & Silva, S.A. “is, since 1978, the leading Portuguese producer of tubes and accessories in plastic materials”, as highlighted on its official website. Located in Oliveira de Azeméis, the company owns several specialized production units, stocked with “the latest technology for the design, development, production, and control of a wide range” of products for several applications and activity sectors. Operating in a “strongly competitive market”, productivity is an essential factor for success, which demands stellar performance in all business areas, from the production lines to stock management, and also necessarily including IT infrastructure.

This justifies the investment in POWER8, a technology optimized to support critical workloads and duplicate the performance in comparison to the previous generation of IBM systems. In addition improving performance, it also promotes cost reduction for IT operations, namely cutting costs with software licencing and implementation times. With a POWER8 system, you can manage a business network’s most important applications, while processing more data with fewer cores. It also provides more security, greater availability, and presents constant flexibility. Its elastic capacity allows you to monitor your business’ growing demands, namely for introducing new applications or reducing the current existing ones.

As an IBM Gold Business Partner, Eurotux has an ample experience and recognized skills in implementing IBM systems. Contact us now to get the POWER8’s full potential. 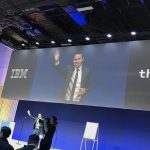