Eurotux Group is having its best year ever

In the first semester of 2019, the Eurotux Group achieved a growth of 35% in revenue for the same period of the previous year, highlighted by the increase of foreign revenue. There was a substantial increase in billing outside of Portugal, underscoring the good results of the ongoing internationalization strategy.

The success is part of the consolidation of the Group’s core areas, illustrating a tendency of growth that continues into the second semester of 2019. The expectation is for the Group to achieve its best ever numbers, as a result of the positive impact of internationalization of the DEVOPS services and outsourcing contracts that will be activated.

In the last few months, Eurotux invested considerably in DEVOPS services, drastically increasing its business volume in this area, as well as in cloud services. Sonae Group companies contribute to this growth, in a partnership that has been incremented with the amplification of the range of services on offer, and with the penetration into new sectors.

“The positive numbers reflect the excellence of the work that has been developed by a team of highly qualified and dedicated employees”, highlights Eurotux’s CEO, António José Coutinho, highlighting that the goal is to carry on this path, always accomplishing “more and better”, and focusing on a “strategy of sustained and differentiating internationalization”.

Behind doors, the next great leap forward is the inauguration of the new facilities in Braga. A large investment that aims to improve the working conditions for the project teams, which continue to grow. The Eurotux Group’s number of employees is expected to surpass 60 before the end of the year – yet another fact illustrating the exponential growth of several companies of Eurotux’s universe. 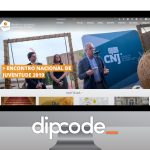 National Framework of Reference for Cybersecurity presented at Eurotux Ecosystem